Keeping an active watch on all our missions

Header introduction
BRGM's corporate social responsibility (CSR) approach is implemented through various economic, social and environmental measures. Supported by responsible governance, this approach was reinforced in 2019 for the purpose of fighting corruption and breaches of integrity.
Body

An anti-corruption code of conduct

After extensive work on ethics in 2017 and 2018, BRGM continued deploying its responsible governance approach by applying the "Sapin 2" Act. This text seeks to strengthen the fight against corruption and breaches of integrity by obliging large companies to exercise vigilance and protect whistleblowers. "BRGM intends to ensure legal compliance in all its activities in order to prevent and cover risks, especially those associated with conflicts of interest, with a view to strengthening the confidence of its stakeholders," says Fabienne Boutreau, CSR adviser to BRGM's General Secretariat.

An anti-corruption code of conduct was drawn up once the risks had been identified. This document, which extends BRGM's code of ethics, was validated by the Board of Directors and then incorporated into the internal regulations following a consultation with the works council in April 2019. In particular, it describes prohibited practices, risk situations and the conduct to be followed. "In each case, the code sets out the context, identifies who is potentially concerned, indicates the signals that should trigger an alert, and specifies the rules to be followed," adds Fabienne Boutreau, who has been appointed anti-corruption adviser. "The idea is to provide clear guidelines and safeguards to ensure that no-one has to face such situations alone." The code provides for penalties in the event of non-compliance.

A prevention scheme was presented and deployed to support BRGM's approach and help employees. Based on transparency and knowledge, it includes training, mainly in the area of ethics, for personnel at risk, both at the Orléans site and in the regions. The declaration of personal interests, which was already in use for expert appraisals, was extended in 2019 and is now systematically recommended to members of BRGM's governance bodies (Board of Administrators, audit, scientific and ethics committees, etc.), as well as to executives (members of the Board of Directors and their deputies) and managers. In addition, all employees have been made aware of this declaration, for which a new single form has been introduced, in compliance with the General Data Protection Regulation (GDPR). The form is accessible via the Intranet and comes with instructions for use. It must be completed online and then forwarded to a dedicated mailbox for storage in digital format. "This proactive approach aims to protect BRGM and its employees" stresses Fabienne Boutreau, who is encouraged by the number of declarations collected in 2019, which was almost 50% higher than the target.

Once again in 2019, BRGM took part in major events related to sustainable development issues. Echoing the scientific concerns underlying its work, its new activities enabled these themes to be approached in a different way. For example, three talks were organised in June and September, first as part of the European Sustainable Development Week and then for the European Mobility Week. Organised during the lunch break and followed by a debate, they enabled some 225 participants in person in the Orléans auditorium (as well as 35 joining by video-conference from the regions) to exchange views with experts from outside BRGM on rare metals, the electric car and the French Mobility Act.

The latter subject was presented by Bruno Malinverno, then vice-president of Orléans Métropole in charge of transport, travel and rail policy. This local authority also helped organise a visit to the biomass-fired heating plant in the La Source district in November during the Week for the Circular and Inclusive Economy. Lastly, for this same event, two screenings of the film Tout s'accélère ("Everything is accelerating") took place at the Orléans auditorium and live on the intranet. This documentary on the frantic pace of the world was watched by more than 140 spectators. 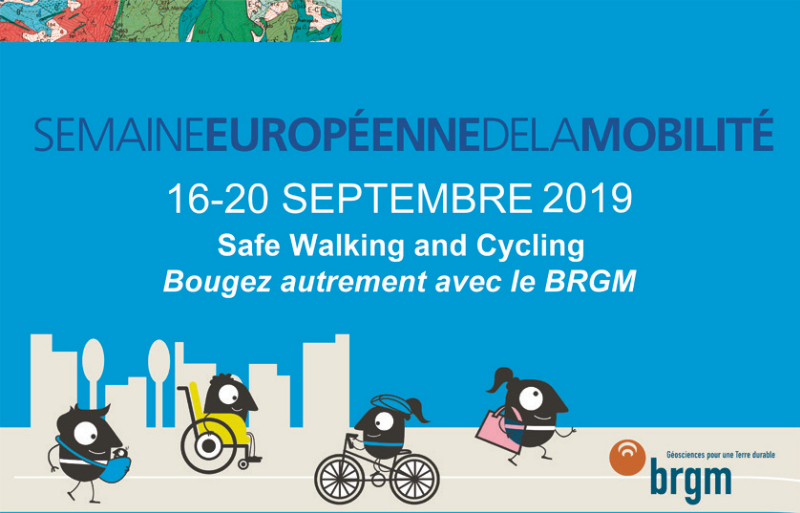 ISO 14001 certification: BRGM proves its commitment to the environment

Since 2012, in addition to its ISO 9001 certification, BRGM has been working tirelessly to control and reduce the environmental impact of its activities. In line with this, in 2019, its environmental action plan included some thirty measures. Those implemented on the Orléans site include maintaining biodiversity by replanting 130 trees, installing 500 new LED lights over the last two years, and installing charging stations for electrical vehicles. Releases into the environment (water and air) are monitored by specific schemes, which are checked very regularly. Our actions in the regions include the installation of solar panels on the Montpellier site. Lastly, special attention is being paid to efforts on the ground to prevent environmental risks, for example in post-mining, where seven major projects underwent an in-depth review of the potential environmental issues and impacts to be dealt with, from the design stage and before their implementation.

authors
Exergue
A prevention scheme was presented and deployed to support BRGM's approach and provide employees with guidelines to fight corruption and to comply with ethical standards.
Précédent